Recently I was doing a small editing job for a friend, and ran into a few interesting problems.

The footage provided was shot partially on a Canon Powershot, which saves it as an AVCHD MTS stream. My computer is not really up to editing AVCHD, so I decided to transcode the clips into something less CPU intensive. The final output would be delivered in letterboxed 640x480p25 because of the limitations of the second camera, so the quality loss was of little concern. Having had decent experience with AVID’s DNxHD codecs, I decided to convert it to 1080p25 36 Mbps version. And then, the problems began.

Even though Premiere Pro did import the file without a problem, Adobe Media Encoder did hang right after opening the file for transcoding. I decided to move the footage to AVID thinking that perhaps it would be a good project to hone my skills on this NLE, but it was complaining about Dolby encoding of audio, and didn’t want to import the footage. I then tried to use Sorenson Squeeze to convert it, but it also threw an error, and crashed. Even the tried MPEGStreamclip did not help.

I was almost going to give up, but then came up with an idea to use Premiere’s internal render to transcode the footage by putting it on an XDCAM HD422 timeline, rendering it (Sequence -> Render Entire Work Area), and then exporting it with the switch that I almost never use – “Use previews“. I figured, that once the problematic footage is already converted, then the Media Encoder will handle the reconversion using previews without problems. I was happily surprised to have been proven correct. And because Premiere’s internal renderer was able to cope with the footage without a glitch, it all worked like a charm. 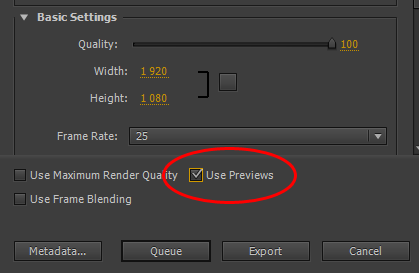 “Use Previews” can sometimes save not only rendering time, but also allow for encoding problematic files.

Afterwards the edit itself was relatively swift. I encountered another roadblock when I decided to explore DaVinci Resolve for color grading, and exported the project via XML. Resolve fortunately allows custom resolutions, so setting up a 640×480 project was not a problem. I also had to transcode the files again, this time to MXF container. This was a minor issue, and went relatively fast. However, due to the fact that some media was 480p, and some 1080p, and I have done quite a lot of resizing and rescaling of the latter, I wanted to use this information in Resolve. Unfortunately, Resolve did not want to cooperate. It’s handling of resize was very weird, and every time I clicked on the resized clip to grade it, it crashed. I’m certain that the scaling/panning was responsible, because when I imported the XML without this information, everything worked great. It might have something to do with the fact, that I was running it on an old GTX260, but still, I was not able to use the software for this gig.

In the end I graded the whole piece in Premiere Pro on its timeline. Here’s the whole thing for those of you who are interested: