The Pure Contrast effect allows you to manipulate the contrast of your image in the lightness channel of the HSL color space, without changing the actual saturation. Contrary to most other solutions, it creates the true S-curve, leaving your white and black points intact. Before applying contrast, you can use standard Offset, Gamma and Gain controls to adjust your image, and select the pivot point around which the contrast is going to be increase. Using additional options you can tweak the contrast curve to your heart’s content.

Because this plugin relies on the pre-calculated LUT, it’s very quick to render.

The plugin can be found in the effects group “Creative Impatience”, and is called “CI Pure Contrast”. To apply it, drag it over the layer, to the effects panel, or in CS6 or later double click, if your clip is selected.

Usually you will start with adjusting your clip’s white and black point, using Offset and Gain controls, and then use Gamma to get your midtones roughly where you want them to be. Then you will select the pivot point of the contrast, and increase or decrease the Contrast slider.

Quality is the size of the applied LUT. This plugin pre-calculates the contrast curve, and it is very fast even without the GPU acceleration. If you are not happy with the result, or you see too much grain or posterization in the image, you can increase the quality for better effect.

Offset, Gamma, and Gain sliders will affect the picture before the contrast curve is applied. Adjusting the offset slider moves the whole histogram up and down, gamma affects the midtones via power function, and gain mutliplies the color value, affecting mostly the highlights. The changes are applied to the lightness channel of the HSL color space without affecting the saturation. 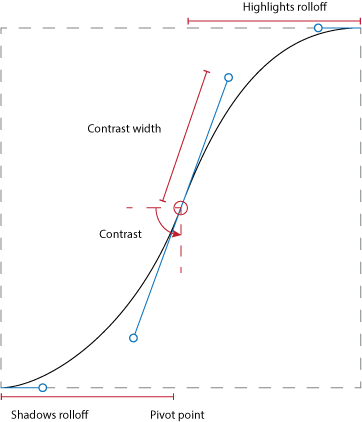 This picture illustrates what each parameter of the plugin does to modify the contrast curve.

Contrast determines the angle of the middle control point of the S-curve. The value of 0 equals 45 degree angle. Positive values increase the angle up to 90 degrees, and negative values decrease it to 0 degrees.

Pivot is the point around which the contrast will remain the same. Simply pick the spot where you wish your center to be, and the contrast will be applied around the luminance value of the selected spot. If you want to adjust it by sliding, simply click on the color rectangle and adjust the Brightness parameter in the system color picker.

Shadows rolloff is the handle on the left control point. If you want to get more pronounced shadows, increase this value. It allows you to for example retain deep shadows when you reduce the overall contrast of the image.

Highlights rolloff is the handle on the right control point. To get more contrast in the highlights increase this value.

Blend with original allows you to dial back the adjustments that you made.

Clamp black on output will make sure that there are no values lower than 0.

Clamp white on output will make sure that there are no values above 1.

Due to the nature of the calculations, this plugin will reduce the perceived saturation of the shadows and the highlights. This can be used to very quickly create a bleach bypass effect.

Did you find a creative application for this plugin that was not envisioned? Share the idea with the rest of us!