Update: see how right or wrong I was with what is actually coming in the next release.

In their recent video concering the introduction of Adobe Anywhere – which I will elaborate on more in another note – guys from Adobe revealed a few interesting upcoming (or at least being tested) features in Adobe Premiere.

Both presenters were using custom development build of Adobe Premiere (the same that you can see at Al Mooney’s presentation at IBC 2012). Especially take a look at around 2:35, where the transition is being applied. For your convenience I include a cropped screenshot with the timeline panel, where all the interesting stuff is happening. 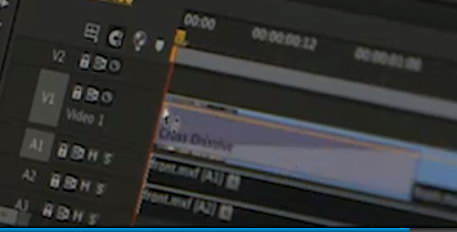 Take a look at mute and solo switches for audio tracks, much wider transition bar centered on the clip, and an interesting button to the left of snapping, most likely toggling the display of audio waveforms. The last option brings into mind a possibility of delaying creation of peak and conforming audio files in the preferences (wild guess). Notice that there is no “untwirl” triangle in either video and audio tracks. The menu to select what property is keyframed on each clip in the timeline is not visible as well.

Update: I forgot to include the fact, that at some point in the IBC presentation Al Mooney drops the clip from video track 2 to track 1, and he most likely did not do it the old fashioned way, but used a keyboard shortcut to do this. It’s a new feature as well, requested by many Final Cut users.

Michael seems to be dynamically adjusting the lenght of the incoming crossfade during application – with cursor keys perhaps? What a wonderful idea, straight from the Illustrator! No more clicking in effects control panel or hunting for the small handles, access directly from the timeline.

I’m also curious about the red pencil icons on the media in the project window. Are there simply markers for Adobe Anywhere assets, checked out, in sync, or is there something else going on?

Interestingly, the clip in the timeline is MXF – is the support for DNxHD in MXF containers coming to Premiere as well? We shall see… One thing is certain – OpenCL for Windows for AMD cards in Adobe Premiere is most likely coming very soon (see here at about 3:10).

These are all the details that I’ve seen in the video. But there is one additional, very important development. For some reason, even though Anywhere is touted pretty much, very little has been made out of the mention of the fact, that the footage in Anywhere is delivered in a proprietary Adobe codec. This is important. Native Adobe codec is something that many of us have been asking for even before the creation of Cineform and its brief inclusion in one of the versions of Premiere, so that in colaborative environments we can skip QuickTime and it’s dreaded problems with gamma.

Most certainly the encoders will be platform agnostic (as oposed to Apple ProRes). We’ll see how well it stacks against Avid’s DNxHD, and if it can be used as a mastering/delivery codec as well. Of course, the real key to popularity is making hardware vendors like BlackMagic, AJA or Convergent Design support direct recording in this format, which most likely will not happen overnight, and the ability of really high-end tools like Nuke to work with it.