The proper way of using transitions in Adobe Premiere Pro

SIYAH (Summary If You Are in a Hurry): If you want your clip to fade to black, apply simple cross-fade at its end. Use dip to black only as a transition between two clips, not at the beginning or at the end of a clip.

There seems to be some misunderstanding about how and when to apply transitions like Dip to Black or Dip to White in Premiere Pro. It is even propagated in some training videos and this is pretty unfortunate. I hope this article makes the issue clearer.

First, let’s take a look at how transitions work in Premiere in general.

You can apply any transition as a transition between two clips (“Normal transition”). By default it will be centered on the edit point, although you can easily change it either in the timeline, or in the effect control panel. The transition will then be applied between the two clips – applying the cross-fade, slide, wipe, swush and any other wild effect that you choose to use.

You can also apply a transition at the beginning, or at the end of a given clip (“Single transition”). In that case, Premiere will act as if it was applied between your clip, and a transparent video clip, revealing (but not proplerly transitioning to) the layers beneath, and if there are no layers, the black background.

Cross-fade transition applied at the beginning of a single clip. It is the proper way to fade the clip from or to black.

Push is a good example of the difference between transition and reveal. If you apply it between two clips, you will see both pictures moving. However, if you only apply it to a clip on a layer above, only the clip with the transition will move, revealing a static clip beneath. There are times that you might want to use one way or the other, depending on your artistic preference. No way is necessarily more proper than another, just be aware of the difference.

Push transition applied as the transition between two clips. Both clips take part in the movement. 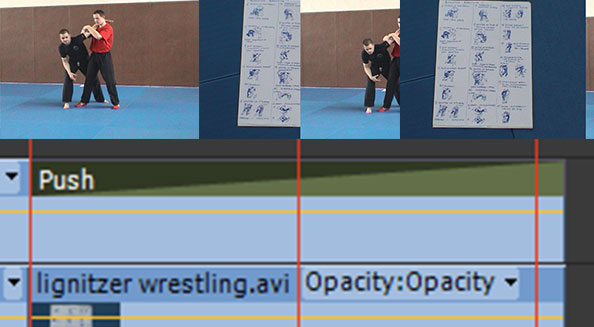 Push transition applied at the end of a clip reveals the underlying static layer. Only the clip with the transition is moving.

Now let’s take a look at how Dip to Black or Dip to White transitions work.

Each is an equivalent to creating a single frame of black or white, and cross-fading first the outgoing clip into the given color, and then fading in the incoming clip from this color.

Dip to Black as a transition fades the outgoing clip to black, and then reveals the incoming clip by fading from black.

Dip to Black applied to the beginning of the clip will produce the first half of the transition as black frames. You should never do that. Ever.

Dip to black might also produce some weird results with multiple layers or transitions stacked upon each other. It used to be worse in previous versions (the example shown in the video mentioned at the beginning would fade the whole sequence to black upon encountering the video due to a bug in render order in CS3), but still dip to black will fade all layers below itself to black, not only the clip that you apply the transition to. It might surprise you, especially if you don’t know how exactly the effect works. 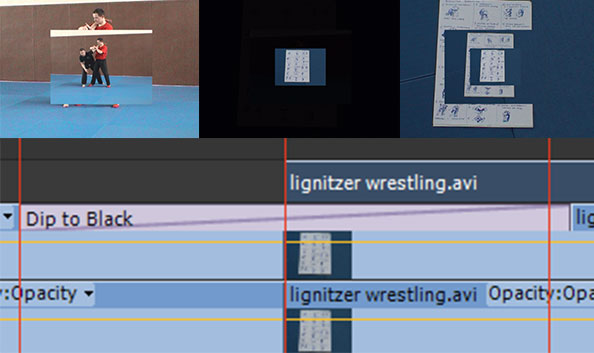 Dip to Black applied to a given layer will fade to black not only this layer, but also all the layers beneath, and in earlier versions of Premiere also the layer above. Unless you know what you are doing, stay away from this method of applying this effect.

I hope this clears the issue.

Additionally I’d like to offer a few productivity tips regarding the transitions in Premiere Pro CS6: