No smart rendering in Premiere Pro?

SIYAH: Premiere Pro for rendering divides the timeline into sections based on clips and edit points. If you cancel the rendering process it discards the results of the section that was being rendered at the time, not the whole render.

Many people who switched from Final Cut Pro to Premiere are thrown off by the fact that if they cancel rendering, Premiere seems to throw away what has been rendered so far. At least this is the impression that you would get listening to several opinionated individuals like Chris Fenwick (whose point of view I like to listen to, especially at the Digital Convergence Podcast, even if I disagree with him from time to time). However, the way Premiere handles renders is a bit different.

First, let’s give credits, where they are due – Final Cut Pro had a great feature: when you stopped rendering, it did not discard anything that you rendered. I wish Premiere were as clever as that.

However, not all is rotten in the state of Denmark. The way Premiere handles rendering might not be as clever as many would like, but it is not as dumb, as this single problem might lead you to believe.

In the rest of my article I’m going to assume that you indeed have to render clips in question, especially since Premiere does so much stuff in the real-time these days.

Premiere handles renders on the sub-clip basis. At the simplest level, the timeline is divided into sections based on clips’ visibility and edit points. Therefore each applied transition creates its own section, because it consists of two clips. Also, if you stack clips one on top of the other, each start or end point on the top layer creates a new render section. Opacity and blending modes are a bit more complicated, but it mostly comes down to which edit points and transitions are visible. Once you understand that, it’s really not that complicated. 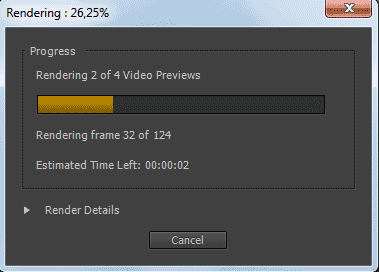 Premiere Pro divides the timeline into sections called Video Previews, and after cancelling discards only this section that was being rendered at the time. All the remaining previews are kept.

Take a good look at Premiere’s render progress window, and apart from the number of frames, you will also see the number of video previews – this is the amount of sections that the selected part of the timeline was divided into. If you cancel your rendering at any point, you lose “only” what was rendered within the last clip. Granted, if this was a long – or time consuming – part, you might be a bit unhappy, and justifiably so. However this is a bit different, than the picture painted by a few prominent individuals.

What is perhaps most funny is that at least some of the code necessary for the so-called Smart Render is already in place. If you start rendering in the middle of a clip (via Render Work Area or Render In To Out options), then the new section will be created at the point where the render started. Rendering will also stop at the end point, even if it is in the middle of a clip. So partial renders are already possible. It’s just that for some reason these few lines of code necessary for saving them after hitting “cancel” are still waiting to be written. Hopefully not for that long.

That said, there is one exception, when you can indeed lose all your currently rendered files – it happens if the application crashes (unlikely, however possible), and/or if you don’t save your project after render. The render files will be present on your drive, but there will be no way to link them, because Premiere did lose reference. Come to think of it, unless the render sections’ IDs (and filenames) are calculated randomly, there is little reason for it, and it should be possible to find the missing render files and relink them even after a crash. A feature request perhaps?

Another not so clever way of handling renders is the visibility problem – if you have two clips stack upon each other, even of the base layer is not visible, and you manipulate it, for example by changing an effect underneath, Premiere will force you to render again. Which is plain stupid in my not so humble opinion, and if my memory serves well, it was not always the case, although I might be wrong.

Premiere’s rendering however is smart in a different way – it does not lose what it once rendered. If you stack two clips one upon another, add some effects, render them, and then move them or change the keyframes, it will of course make you render again. However, if you move the clip back at some point, change the keyframes back, or in any other way return to a previously rendered state, Premiere is wise enough to bring back the rendered files. Good luck trying it with FCP with anything except an immediate undo!

That said I am waiting for the moment when Premiere Pro embraces Really Smart Rendering, perhaps on the par of Global Performance Cache in After Effects, Background Rendering on the par of Digital Vision Film Master (which unlike FCP X does manage resources and allows you to work during rendering) and Smart Auto-Save during render. At that point the editing is going to be strictly fun, and you’d better enjoy it, because your coffee breaks will be gone