…check if the process called Adobe Premiere Pro.exe is still running and kill it.

Granted, crashes of Premiere have mostly been the thing of the past. Since upgrading to CS5 I don’t remember the time when I actually lost anything in Premiere’s crash. But then, some people still have problems from time to time. So here’s a tip.

Sometimes Premiere Pro crashes, and no matter how hard you try, you can’t reopen it by double clicking on the shortcut icon, or even directly attempting to open the Adobe Premiere Pro executable file. If you restart your machine, everything works fine. But let’s be honest – you don’t want to waste precious minutes on shutdowns and reloading Windows, especially if there is a looming deadline ahead (and we all know that weird things happen when projects get close to completion…). If you log out, and log back again, you could save a little bit of time, and things should work fine again.

But there’s much quicker way to do it. Run Windows Task Manager by right clicking on the start bar, and selecting “Start Task Manager”. Then click the “Processes” tab, and take a close look to find a usual suspect. Or perhaps click once on the “Image name” column, if the list is not already sorted this way, and then locate the “Adobe Premiere Pro.exe” process. Select that guy, and hit “End process” button. This will remove the remaining traces of crashed Premiere from the memory, and if you click your Premiere icon now – surprise, surprise, the application will load without any problems. 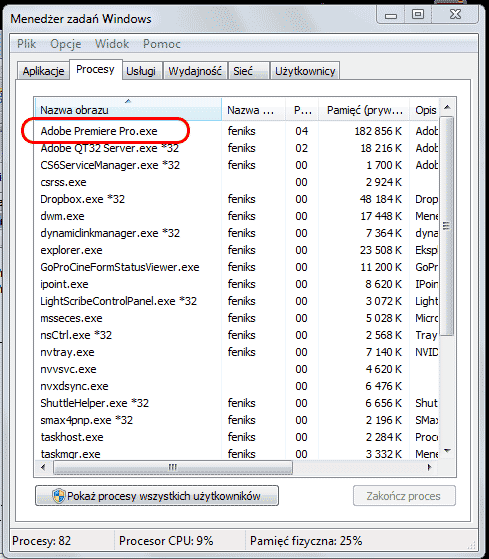 Windows Task Manager interface, and our culprit. I hope the foreign language does not make you wince too much :)

The reason for that is very simple – on startup, Premiere looks if its main process is running. If it is, it terminates what it considers to be a recently run duplicate copy of itself, and asserts that the former is running fine. It doesn’t matter that it isn’t, Premiere is too lazy or too inept to realize that it had just crashed on you, and left remains in your system’s memory.

I hope this tip saves you a moment or two in the unlikely event of such a crash. And if you are more tech-savy, you might consider downloading a free task manager replacement called Process Explorer, which gives you much more and much more detailed info about processes running on your system.